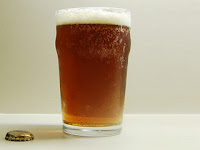 If you like classic brews, here's one for you: a beer made from a 9,000-year-old recipe.

Dogfish Head brewery has released Chateau Jiahu , a beverage based on the ingredients that were discovered in pottery jars from a village in Jiahu, in Henan province of northern China.

Researchers say that a mixed fermented beverage of rice, honey and fruit was being produced thousands of years ago. This was during the same period that people in the Middle East were beginning to make barley beer and grape wine, according to the Delaware-based brewery.

"Probably, all beer thousands of years ago – to our modern palates – would have tasted spoiled," Dogfish Head owner Sam Calagione told NPR in an interview. "In fact, in a lot of hieroglyphics, people are shown drinking beer using straws because they were trying to avoid the chunks of solids and wild yeast."

Patrick McGovern, a biomolecular archaeologist at the University of Pennsylvania Museum of Archeology and Anthropology, studies fermented beverages by analyzing the ancient pots that once held them. He worked with Dogfish Head to create the brew.

For Chateau Jiahu, McGovern figured out that the vessels from China once contained an alcoholic beverage made of rice, grapes, hawthorn berries, honey and chrysanthemum flowers.

The brewer plans to brew about 3,000 cases of Jiahu. Each wine-size bottle sells for $13.