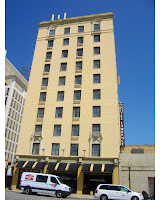 The Hotel Lawrence in Dallas is a nice old hotel which was built back in 1925, has a history and apparently some uninvited guests.

My room is small but clean, and the staff is quite friendly and helpful. The hotel prides itself on its washrooms which, despite its small size, is quite nice. You see from the picture there are two types of shower streams. You can use the nozzle, the stream from the lower pipe or both. I chose both. The bathtub is deep too and will be taken advantage of. The view from my room (pictured) is terrific and I plan to go up in that tower this weekend.

When I was Googling the hotel last week, Google entered the word "haunted" in my search. "Hotel Lawrence Dallas Haunted". 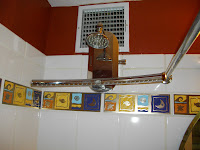 It seem there are three ghosts in residence here. On a website How to Visit Haunted Sites in Dallas, the Hotel Lawrence was number one on the site. In room 1009, there was a grizzly murder and later a congressman committed suicide in the same room. A woman also jumped to her death from the tenth floor.

According to the Texas Haunt Society, "Guests have heard the sound of high heels walking across the lobby floor late at night, heard voices, and have felt cold spots. Laundry carts have been reported to move by themselves, the front desk often gets calls from three rooms that n 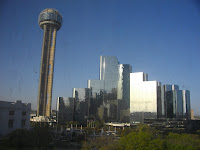 o one has checked into. Supposedly, the door at room #1009 on the 10th floor gives resistance from the opposite side to the staff if they try to open it."

Nothing unusual happened last night. I was hoping that if the ghosts wanted to bother me, they would do it last night. I need my sleep the next two nights so ghostly apparitions please stay away.
Posted by Swordsman at 09:31