Fencing in Dallas at the NAC 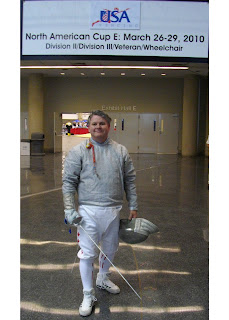 After a couple of days in Dallas, it was time to get down to business.

It was time to fence.

I had come to Dallas for two competitions at the NAC (North American Cup), along with 1,073 other competitors. Great for the local economy for sure. Over 100 rooms were rented at the Hotel Lawrence to fencers alone.

My first competition was Men's Veteran Sabre Combined for everyone 40 and over. 33 were entered and there were 2 pools of 6 and 3 pools of 7. I was in a pool of 7. I looked at who I was going to face and there were 3 top level fencers in the group and the others looked just plain good. It might be a long day.

I lost my first bout to one of the "A" group, won the next 2 bouts, one by a 5-4 margin where I won the final hit by using a new move I have been working on the past couple of weeks. After losing the next two, I was looking to win the last one, against someone I knew I could beat. The judge then started calling against me, as when I was advancing in attack, my blade was pulled back, so it was not deemed an attack. I lost three hits that way, and lost 5-2. Would have been 5-2 the other way if I was given those hits.

Not blaming the judge. I have done this before and guess with being tired after 5 matches, was sloppy in my attack. Something to work on in the future.

After being knocked out by the 7th ranked fencer, I finished my day 25th out of 33. Should have done better. Should be able to win 3 and end up, in the very least, top 20, if not top 16. After all, I knocked off a left handed fencer who ended up winning 4 of his 6 matches. I know I am better than 25th.

After heading to the room to clean up and hanging up my gear to dry overnight (fencing gear hung in a sunny window over the air conditioner pictured right, my fencing pants hung in the other window), I had a great supper and good time after with Vince (who finished the day 14th) and Gaby (who fenced foil in the Veterans 60-69 and finished 11th out of 28) and then hit the sack early. Next morning, I fenced at 8, so woke up bright and early to a huge orange Texas moon. Tried to get a good picture, and the best through my window is below.

As usual, I lost my first match badly, which was costly as it was someone I should 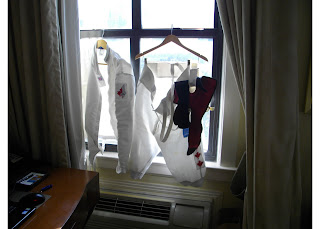 be able to beat. Again, something to work on. Now warmed up, I won the next two and then lost the next three to top flight fencers. Again in my last match of the day against Dan C, I had problems in presenting my attack and lost badly. Dan, a great fencer who went on to win silver, took me aside to explain what he say me do, and how he took advantage of that.

I was ranked 17th out of 25 and a little ticked about that. I also had problems with my wire coming off my sabre through out the day, losing me points. A vendor from The Fencing Post was over watching a friend fence in my pool and saw my problems. In the middle of the pooles, he came over grabbed a new wire for me and took my sabre to inspect, so I hooked up to my old competition sabre and went to finish my last two matches.

Turns out the handle in my sabre had broke and folded up my guard. Too busy checking my wires to notice. Also it had a lousy clip which he demonstrated. He was very helpful. I still had two sabres left but one is a heavy old practice sabre so I bought a beautiful new one from Saul, the owner, and went into the DE (direct elimination) well-armed and confident there would be no further problems.

I was focused. No more problem with my attacks. I was going to do this. It was a good seesaw battle. In a match to 10, I led 9-8, then lost the next point. 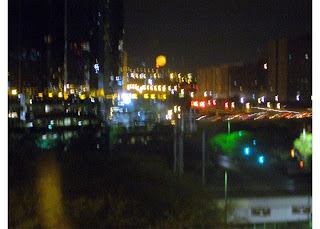 was going to lose this. No damn way.

I came off the line and he retreated. I am an attacker ... he was all mine. I walked him back down the strip, closed in, faked to hit his blade, then instead clunked his head.

Fencing has a great competitive but sportsman like community. The competitions at the NACs are great as are the people. It is a fabulous experience to fence in that level of competition.

I can hardly wait for the next one.
Posted by Swordsman at 19:24