Last night after seven+ years, Teena and I finally went to a play at the The Theater Centre located in our neighborhood. Actually we saw two plays, both an hour and half long with an intermission in between.

Teena and I shared the same views on both plays so to read Teena's review of Debbie Does Dallas, The Musical, which I thoroughly enjoyed, click here. For her review of Hedwig and the Angry Inch, which I did not like at all, click here.

It is a small theater holding around a hundred people on the main floor and balcony area which is licensed. To the left is Teena in the balcony area. Below, guest blogger, Teena, writes about The Theater Centre. 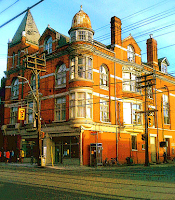 The Theatre Centre is in our 'hood and Gord and I have been wanting to check it out for a while.

It is part of the Great Hall, which was built in 1889 and housed the first west end YMCA in Toronto. The "Y" offered athletic facilities that included a gymnasium with a raised running track and a basement swimming pool. It was home to some of the earliest basketball games ever played in history.

Over the years, it had many uses including that of the Polish National Union where the presses on the ground floor rolled out copies of The Polish Voice newspaper. On the top floor, rooms were used as temporary shelter for Polish refugees fleeing the war in Europe.

In the mid-80s, the rumble of the presses was replaced by the sound of experimental music and avante-garde art. The Toronto School of Art eventually helped to establish it as an important address for Toronto's arts community.

Today it is a multi-use commercial/residential building consisting of the Theatre Centre operating in the basement for artists who produce and direct original Canadian works. The commercial space fronting Queen Street W is home to Cream Tangerine Art Gallery & Café. The Great Hall on the main floor has a two storey vintage space with 40 ft. ceilings and a third floor balcony, complete a with full kitchen. My friend Deb's daughter got married there in 2002.

A recording studio that works with Canadian artists to produce music and films has space on the top floor. Other areas are home to many writers, photographers and musicians who rent studio space in the building.

Here's Gord outside it tonight: 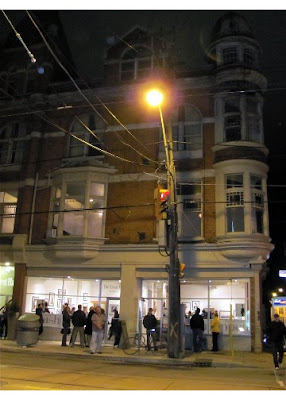 There is a bar as you enter the theatre space. You can buy snacks including cupcakes ... Chia Kitty was excited about this! 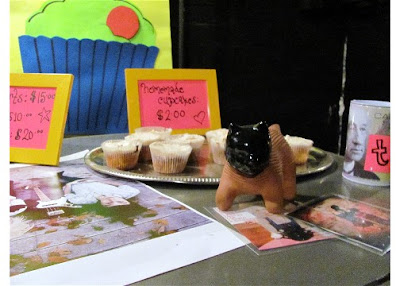 As you enter the actual theatre space, you are on the balcony. The liquor license entends to the balcony so you can watch a play while having a cocktail. Here's the view from it: 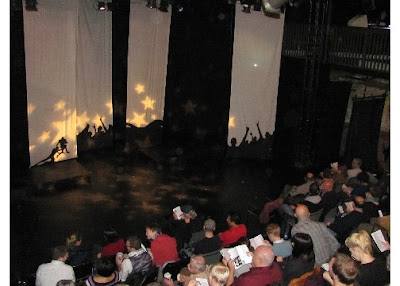 The theatre can seat about 120 people. You have to walk down stairs from the balcony to get to the main seating area (where we sat). We suspect this was originally the gym and the balcony was the running track.

It's a good space to check out ... cheap tickets and a small intimate space.
Posted by Teena in Toronto at 11:30

Labels: Live Theater, Things to do in Toronto