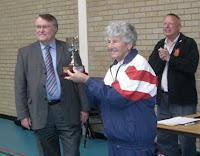 Should I ever hear that, I would let them know about Constance (Connie) Adam from Great Britain.

Two years ago, the Commonwealth Veteran Fencing Championships came to Toronto and I took part. There was a competitor meet and greet BBQ in Thornhill and that’s where I met Connie. She was sitting at the same table as myself and a few others and looked to be perhaps in her early 70s. A friend of hers came over and asked her how her knee transplant went and which one she had done.

Here is this senior who went through a double knee transplant and a year later jumps on a plane to Canada to fence.

I was even more impressed to learn that she was competing in all three weapons ( foil, epee and sabre) which is three days in a row of competition. She's tough.

My competition was on the Sunday and I went Saturday for my equipment check and had an opportunity to watch her fence. With her new knees, she didn't move well but she had a very fast hand. Over that weekend for the individual over 70s group and team events, she took home a gold, silver and two bronze medals.

Even more impressive is that she was 79 at the time!

I read that she took up the sport at 59 after her husband passed away. She said, "I wanted to do something to keep me fit and went along to one of these 'have a go' days.

"I was thinking about doing archery but I thought I'd try fencing and after having a go, I thought 'I could do this if I work at it.'" She admits that she "just got hooked".

I know the feeling. The sport hooked me in a big way too.

A couple of months ago, she won two bronze at the European Championships and was presented with an "Inspirational Sportswoman" award when she returned home.

This year, the Commonwealth Veteran Fencing Championships are being held in St Helier, Jersey Island, and yes, Connie, now 81, is going to be there. And once again entered in all three weapons.

I hope to meet her again and see her fence.

Goes to show that indeed, you are never too old!!

For an interesting article on Connie, click here.
Posted by Swordsman at 14:44