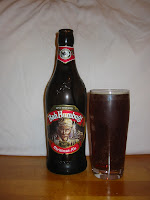 “A merry Christmas, uncle! God save you!" cried a cheerful voice. It was the voice of Scrooge's nephew, who came upon him so quickly that this was the first intimation he had of his approach.

Most everyone has heard of the Dickens tale, "A Christmas Carol", and Scrooge's famous "Bah Humbug", yet Scrooge only says it twice.

So famous a line that Wychwood Brewery, a company that enjoys playing with names, used it in the name of their Christmas Ale. Not a Scrooge myself, I can say I don't really enjoy the season and dislike most Christmas songs, so when I saw this on the shelf at the good ole LCBO, I had to have it. 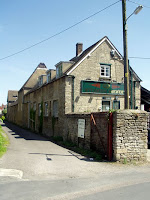 Wychwood Brewery is located in Witney, Oxfordshire in England. It is not an old brewery, having been around since 1983, but occupies the site and buildings of Clinch Brewery, which was built in 1841. Clinch was bought out by Courage in 1961, and the brewery was shut down.

In 1983 the site was purchased by an English brewer Paddy Glenny and was named Eagle brewery. In 1990 the brewery was renamed Wychwood Brewery after the famous Whychwood Forest which borders the town.

The woods are famous for supplying the Royal Navy with wood to build their great armada, with the most famous ship built from it's timber being the Admiral Nelson's Victory.

It is also know as an evil forest, rife with thieves and criminals, who hid there and of course full of superstition. Wychwood has fun in using the evil reputation of the forest in naming it's products. Hobgoblin Ruby Beer, Black Wych Stout, WychCraft Blonde and BeeWyched Honey'd Ale are just a few which they produce.

Artists are commissioned to design the elaborate labels. The bottles have raised designs of witches riding broomsticks around the bottom of the neck.

The ale pours a dark amber color with a good head and enjoyable aroma. And the taste??

Quite delicious. It has a full flavor with a nice subtle spice to it. With each sip it seemed that I discovered something different and wonderful about this brew. In fact it was so good, that I went out and bought more, and plan to have some on Christmas day.

So go out, pick yourself up a couple of bottles, sit back on a cold night and read the tale of Ebenezer Scrooge.

"It was always said of him, that he knew how to keep Christmas well, if any man alive possessed the knowledge. May that be truly said of us, and all of us! And so, as Tiny Tim observed, God Bless Us, Every One!"

Quotes from Charles Dickens "A Christmas Carol".
Posted by Swordsman at 12:22