Baseball Americana: Treasures from the Library of Congress 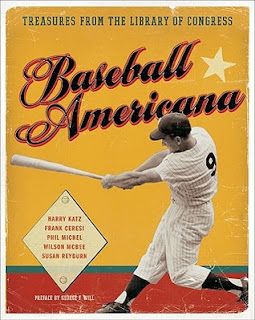 In the spring, I love to warm up to the upcoming baseball season by reading a book about the sport. It could be of a player, team, league, whatever, just as long as it's about baseball.

This year, even though the season has been suspended, hopefully not cancelled, due to the Coronavirus, I still went ahead with this tradition by reading Baseball Americana.

Baseball Americana is a lavishly illustrated history of America’s favorite sport, compiled from the unparalleled collections of the Library of Congress, now available from Smithsonian Books. From baseball’s biggest stars to street urchins, from its most newsworthy stories to sandlot and little League games, Baseball Americana tells the history of baseball’s hardscrabble origins, rich cultural heritage, and uniquely American character.

The book follows baseball from it's earliest days, the days before it's supposed invention in 1839 by Abner Doubleday in Cooperstown, NY (yes, many years before that fabled story), to the 1970's.

Almost everything a person could think of is included in this book. What's remarkable and perhaps the most enjoyable thing about Baseball Americana, are all the photo's of people, fans, baseball cards, advertisements, and much more.

The book also points out some interesting facts which I never knew, such as the story of Jackie Mitchell, Jackie as in the female version of the name. Despite the fact there was a woman's major league in the 1940's, and smaller leagues around the continent, Jackie's story involves playing on a men's team.

Jackie was a 17 year old pitcher who, apparently, could throw a very nasty curve ball. On April 2, 1931, she was signed by the minor league Chattanooga Lookouts. On this day, after spring training, the New York Yankees visited Chattanooga for an exhibition game before the season started.

Jackie started the game for the Lookouts. The first batter she faced? The one and only Babe Ruth, who swung and missed on the first two pitches and was called out while watching the third strike fly by him. He tossed his bat in disgust.

The next batter? Non other than Lou Gehrig, who struck out swinging on all three pitches. She walked the next batter and was pulled from the game.

And that was it for her minor and major league career as two days later, the commissioner of baseball, Judge Kenesaw Mountain Landis, declared her contract null and void and barred woman from baseball. A disgusting decision to be sure. This is the picture shown in the book, before the game, with Lou Gerhig, Jackie Mitchell, Joe Engel and Babe Ruth.

For any baseball fan, this is a great read, one I highly recommend.
Posted by Swordsman at 16:09