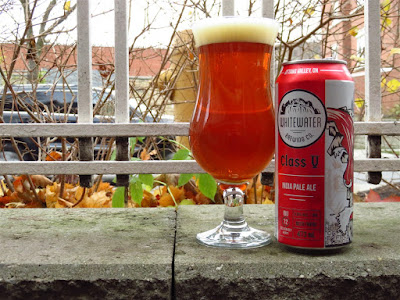 When I think of whitewater, I think of rafting down the Ottawa River on a warm summer day. It's been decades since I've done that but when I saw Whitewater Brewing sitting on the shelf of my local LCBO, it took me back to that trip.

Just now, when I stepped outside into the cold with a hint of snow in the air to take the above picture, whitewater rafting was the furthest thing on my mind. Maybe I should have put on shoes and socks instead of bare feet in Crocs was my prominent thought instead.

The brewery was opened in 2013 by three white water rafting enthusiasts. The three of us have had many adventures that have taken us from the incredible rivers of Ontario & Quebec to the mountain-fed creeks of British Columbia, from the deep canyons of the Colorado River, to the Great Barrier Reef of Australia. One constant that has remained strong throughout this journey is our return to the heart of the Ottawa Valley to share our great adventures with great friends.

Our epiphany came on a rafting trip: The Ottawa Valley was already home to some of the best natural ingredients involved in creating true hand-crafted beer, as well as great people deserving of a local beer to share with friends. Whitewater Brewing Company was conceived.

A year later they changed from just a brewery to a brewpub (pictured below) in Foresters Falls, Ontario. Another place I would like to visit someday.

The Class V IPA (whitewater rapids are graded by class 1-5 with a 5 being the most dangerous) pours amber in colour with a nice off white head. There is pine and a just a hint of citrus to the nose. It starts of a touch malty, but just for a moment, before the piney hops bitterness comes through. Where citrus bitterness are quite nice during the hot summer months, I really enjoy a piney IPA instead when the colder weather comes. The Class V fits that bill very nicely.

I can see more of these coming into my fridge in the coming months. 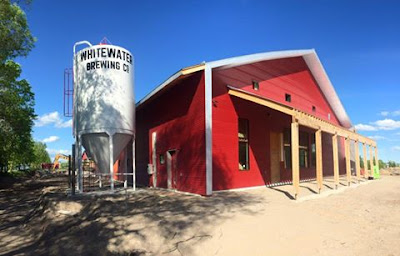 Thanks for taking the time to review our Class V Gordon. Super stoked that it had you thinking of your time rafting as we would love to be associated with having fun and being active. Keep us posted on any of our other beer you try!
The Brewery Boys