Beer of the Week - Side Launch Pale Ale 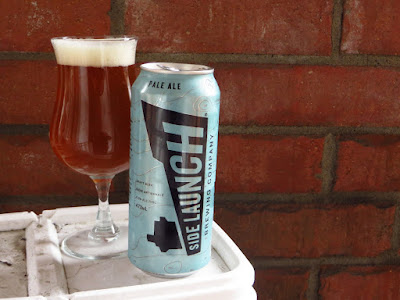 I really like it when a brewery opens up in a small town and in the brewery name or the beers it sells invokes the history of the area. This is very true with Side Launch Brewery from Collingwood, Ontario.

Collingwood was a huge shipbuilding area, building and launching over 200 ships from 1892 to May 6, 1986, when the last ship, the CCSG Sir Wifred Lauier, was launched. During the second world war, 23 warships were built in the dockyards there for action. To launch, the ships were always slid into the water sideways and many people would show up from the area for each launch. Side Launch Brewery promotes this very much on their website.

Side Launch Brewery opened its doors in May 2014. They brew three beers year round, a traditional Bavarian Wheat Beer, a Dark Lager, which is a favourite of my friend, Dave, at work and won a bronze medal at the 2016 Ontario Brewing Awards which took place this past week, and a Pale Ale, which I am trying today.

They also do one-offs. Their Huronic Tripel won gold in the Belgium Style Tripel Category and their Dunkelbach took Bronze in the Barrel Aged Red Wine category, at these same awards.

So how's the Pale Ale? 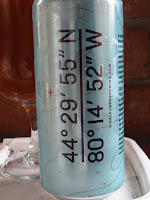 I like how the can keeps the nautical history by giving the longitude and latitude of the brewery on the side of the can.

The beer pours a light coppery colour with a white head. There is some hop bitterness to the nose, which is a little piney. I love piney! Lacings are left behind when I sip.

The pale ale starts a little malty, like an English pale ale. I was expecting piney English style hops to come through like I found in the aroma but instead a bitter citrus comes through in the finish. I love bitter citrus!

This is a very nice beer, one I wouldn't hesitate to have again.

It's been a lot of years since I was last in the Collingwood area. I would love to go up there for a couple of days with Teena and when we do, we will be sure to stop in at Side Launch to take a tour, and, of course, to buy some beer.

Here is a video of some of the ships being launched from the Collingwood Shipyards.