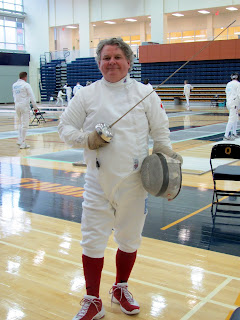 It was a very busy day yesterday.

I fenced foil early in the morning, open sabre (over 40) around noon, then the 50 -59 sabre age group in the afternoon plus attended the Veteran's awards banquet that night.

Could I sleep in this morning?

I had signed up to compete in the open men's epee, which started at 8:30 in the morning.

I bought my very first epee just the past week and had just one practice with it, so really went in with no aspirations of winning.

Epee is an interesting weapon. Where the other two weapons have judges determining who initiated an attack, in epee if your light goes on you get a point. If you and your opponent hit at the same time and the light comes on, you both get a point.

The usual strategy is that if you lead by a point, you just go for the double hits so your opponent can't catch up. Easy, isn't it!

I went out for for first match of the day, hoping just to have fun. Then very early I scored a hit and suddenly was in a 1-0 lead. Hey, this weapon's not too hard!

Then the wheels came off and I realized how hard the day would be. I lost 5-2

The next match I went down 5-1. The third match was against a friend Dave (who finished the poole ranked first, so you know he's good). Dave was up on me 2-0 when somehow I scored a one light hit. My arms raised in victory and thankfully he and the judge laughed. It was the only point I scored in that match and lost the next two matches by the same 5-1 score that I lost the previous tow by.

In the Direct Elimination, I was against Albert from Hong Kong. As usual for fencers, really nice guy 'til he gets on the piste (fencing strip). I was quickly down 5-0 and Dave came over at the break and gave me some pointers. Don't worry about the parry (blocking his attack). Just go for the double touch. "I don't want to hear the sound of your blade touching his," he said. He also showed me a better way to hold the epee, which I felt did give me more protection.

First attack, Albert comes in and I parry his attack, lost the point and heard Dave call out "Remember what I said"!

It took longer for Albert to score points and I actually got a single light touch but that was my only highlight of the match as I went down 10-1 and ended the day ranked 33rd out of 33. Hey, that's last!

It was fun but I have so much to learn. It is a complete differently mindset to fence an epee. I have a lot to learn and it's going to be fun doing it!

Dave (on the left) shows how it is done as Albert attacks but Dave just sneaks his blade up, striking Albert's cuff for the winning touch of the match and ending Albert's day. 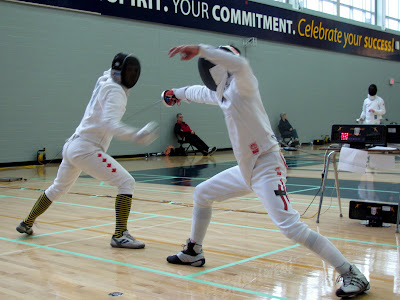 I give you props for entering the epee competition at all!