Beer of the Week - May 2 - Fuller's Extra Special Bitter 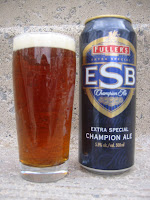 Made in: England, United Kingdom
By: Fuller Smith & Turner P.L.C.

This past Christmas, my wonderful sister-in-law, Sarah, gave me a Page-a-Day desk calendar called 365 Bottles of Beer for the Year. Every day it features a different beer from around the world.

I had already been to my favourite LCBO in the old train station at Summerhill and selected my Beer of the Week. I thought it was quite a coincidence that when I unveiled the new day for April 30, there it was, Fullers ESB from Griffin Brewery in Chiswick, London England.

Now I really enjoyed the last two Fullers products that I have had and featured on the BOTW, Fuller's 1845 and Fuller's Vintage Ale, so when I read the first line from the calendar, I was sure excited to try this one:

"This classic ESB is the one most others are measured against and this bottle does not disappoint. A most sensuous experience that must live up to the most experienced and demanding palates of bitter drinkers throughout the Commonwealth and beyond."

So I was sitting out this afternoon listening to the Toronto Blue Jays battle the Orioles on the radio (Jays win again!) and decided it was time to give this a try.

This beer, having been brewed by Fuller's since 1971, pours a dark amber colour with a very nice head with a strong inviting aroma. It has a smooth full bitter taste, with a nice balance between the taste of the malt and the bitterness of the hops.

Originally launched as a winter ale, it is one which can also be enjoyed on a hot summer's afternoon or as the air cools off in the evening.

Once again the people at Fullers have come through.

On the can, it calls itself the "Champion Ale" and on its website "With three CAMRA (Campaign for Real Ale) Beer of the Year awards, two World Champion Beer awards, and numerous other gold medals to speak of, ESB is, quite simply, the Champion Ale."

I loved this beer and although can not truly call it the "champ", I can claim that it is definitely a contender.
Posted by Swordsman at 14:57